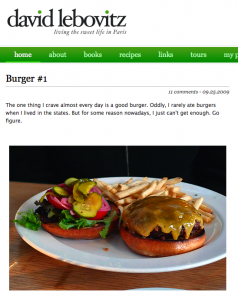 If you’re a fan of food writer, Paris by way of San Francisco transplant and pastry wizard David Lebovitz, you’ll be tickled to hear he’s come back for a visit. If you’re not familiar with hombre, here’s an intro. I know him mostly from his great blog but previously he’s worked with Alice Waters, written the ultimate chocolate book

His visit popped onto on my radar when some burrito tweets appeared from his twitter stream. If there’s one thing I’ve learned, the only time you’ll hear burrito tweets is when someone is traveling to or away from San Francisco. Turns out David Lebovitz (can I just call him David? Dave? Davideano?) came back for some book signings and to speak at the BlogHer Food Conference (held Sept 26th).

Want to follow a great food mind on his SF adventure? So far he’s been to Serpentine for their burger, sampled Humphrey Slocombe ice cream and conquered the Charles Chocolates S’More (how have I not heard about this?!?). I’ve been tickled to hear what he’s chosen to do and he’ll hopefully continue to blog about his food exploits on and talk travel on twitter. He’s got a handful of book signing appearances on his site but you’ll catch me catching him on Monday night at Omnivore books.