Warning: count(): Parameter must be an array or an object that implements Countable in /home/mnha5re7g0ey/domains/thehipsterho.me/html/wp-content/plugins/iwp-client/api.php on line 40
 baking Archives - The Hipster Home 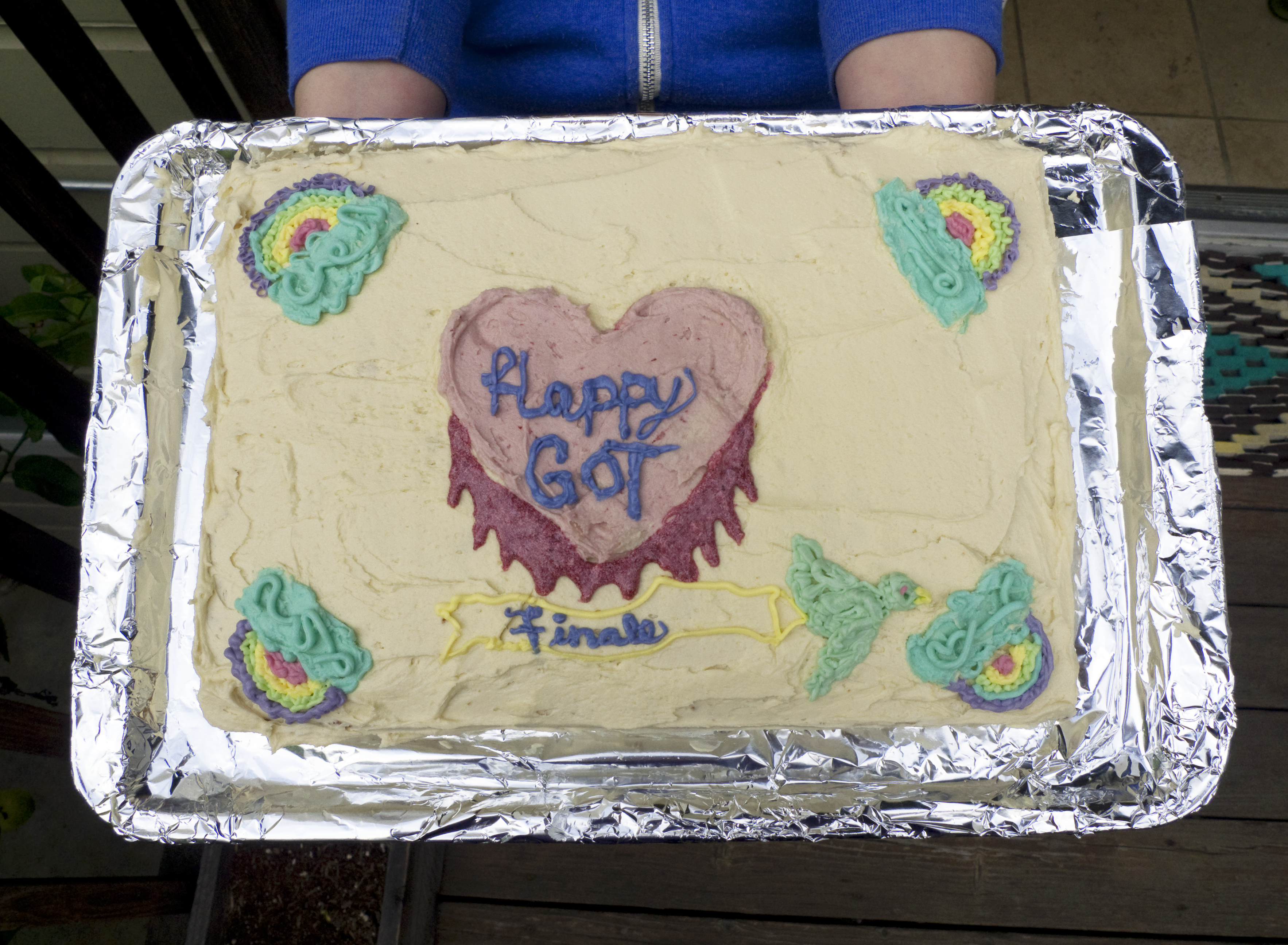 Do you watch Game of Thrones? I do.

Given the trauma of last week’s whimdinger episode, I needed a little pick-me-up for last night’s finale. And so I made this. Thank you, Nicola, for your help! If winter is coming, we might as well get a little cakefat. And obviously we served it with a some extra-creepy blackberry puree.

P.S. I used the sheet cake and berry buttercream recipe from The Smitten Kitchen Cookbook. It was really, really good. Lots of butter. Recommended! Chocolate chip cookies, chicken pot pie and baked eggs with bacon, caramelized onion, garlic and jalapeno and greyere. And they tasted every bit as good as they look! You know what’s better than a cupcake? A WHOLE GODDAMED CAKE.

Each bite is different. You have cake and frosting and cake and frosting again! Best of all, there is no last bite that is just the crummy butt. There’s a reason Larry David made an entire Seinfeld episode about that close bastard brother of the cupcake called the muffin. You know the episode. Jerry & co spend the whole time trying to dispose of bags FULL of crappy muffin butts because everyone loves muffin top. I dare to suggest people only eat cupcakes for the tops as well. And you know what? A well made cake is like BITE AFTER BITE of cupcake tops!

Also a CAKE is a collective experience. You share a whole cake with people, friends. And you can eat just a sliver or a gigantic slice and not feel guilty. But the cupcake? You eat one. Or two and feel like a  cow. But with a cake, it’s easy to negotiate around the serving size.

It was these feelings that brought me to check out a book from the library called 500 Cakes, alleging it was the only cake compendium I’d ever need. I’ve since made 2 recipes from it and while I shant RAVE about it, the results were pretty good. Both the recipes aren’t actually for cakes in the classic sense but ended up being more like loaf breads and were both devoured at the Mr.’s office! The easy lime loaf cake was moist and delicious but didn’t look anything like the picture. (Clearly the food stylist thought the lime glaze was groody looking.) Today I’ll be sharing with you the recipe for the… Preheat oven to 350 F. Grease a loaf pan and line the bottom with waxed or parchment paper. Beat together the butter and sugar until creamy. Taste test to make sure the butter and sugar isn’t rancid. Hmm, not sure? Have another little taste. YUM.  Beat in the sour cream and cinnamon. Beat in each egg and sift the flour, baking powder and salt over the top. Fold it together until a relatively smooth batter. Bake for an hour until the loaf passes the toothpick test (a toothpick comes out clean when inserted in the middle). Let the cake cool and remove from the pan once cool enough to handle. Heat the jelly in a small pan until hot, then brush over the still-warm cake to glaze. Totally cut and eat and enjoy!

Oh this won’t be the last of the cake posts. Expect more. Many more. What kind should I next tackle?