Warning: count(): Parameter must be an array or an object that implements Countable in /home/mnha5re7g0ey/domains/thehipsterho.me/html/wp-content/plugins/iwp-client/api.php on line 40
 basil Archives - The Hipster Home

Sometimes a recipe doesn’t look like much. But if I need SOMETHING to go off of, some vague inspiration, anything will do. Recipes off the back of a Trader Joe’s box included. Last night I’m not proud to say it, but that’s exactly what I did. Realistically, I knew from the get-go that this was some crazy-ass cracked out version of reality where stir frys are related to quinoa and 2 cups of chicken broth disappear magically into a dish without consequence. But damn it, I wasn’t sure what else to cook. So I gave the Trader Joe’s recipe a whirl. So how’d it turn out? PERFECTO! 2 thumbs up! Good enough for me to tell ya about here! But no, oh no. I won’t just reprint the bizzaro-world recipe they gave me. I’ll both share it for amusement and give you what worked for me below that. In the end, the saving grace of the whole meal (besides my fantastical ability to freestyle) was the shining beacon of heavenly fresh produce that made it work.

Garlic Chicken Stir Fry with Quinoa, Peppers and Basil (NO NO NO)

Cut chicken into one-inch pieces. Heat large nonstick skillet over high heat and add the oil. Add chicken and saute for 5 minutes or until golden brown. Add onions, bell peppers; saute for one or two more minutes; add garlic and saute until peppers become slightly limp, but still bright, about one to two minutes; season with sale and pper. Remove the pan from heat; add basil and quinoa. Toss until basil wilts; garnish with parmesan cheese. Serves four

Now you might ask yourself, “Wait a second, I made the quinoa using chicken stock like the directions on the side of the box but wait, I just used 2 cups chicken broth so is that the same thing, why would they list it again? And basil… julienned?? Don’t they mean chiffonade? Why does Parmesan cheese not sound like an appetizing topping?? WHAT THE FUCK IS GOING ON?? THIS RECIPE IS THINLY SLICED.

But don’t get yer panties in a bundle, I fixed it. But first you should know that we roasted a chicken Zuni-style the night before, so instead of cooking the raw chicken, I modified the recipe to re-heat slices of my cold, pre-cooked roast chicken. Here, this is the good recipe. I call this one…

Place quinoa and 2 cups chicken broth in a saucepan and bring to a boil. Reduce to simmer, cover and cook until all water is absorbed (10-15 minutes). The grain will be soft and translucent when done. Heat a cast-iron skillet and add the oil. Add onions, bell peppers; saute for one minute; add garlic, sliced chicken and saute another minute. Lower the heat; add the cooked quinoa, 2 tablespoons chicken broth; stir and cover with a lid. Cook a few more minutes until the peppers become slightly limp, but still bright. Remove the pan from heat; add basil; season with sale and pepper. Serves four… or two hungry bitches… just kidding, two will have leftovers

It’s that time of the week! Wednesday means time for a delicious discovery. 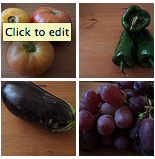 So what did Eatwell put in our box for The Hipster Home? BEHOLD…

Now that we’re swiftly moving from summer to fall, it’s great to be on the receiving end of seasonal change. What used to be heavily tomatoes and basil, is now the remaining basil plant stalks and only one (!!! ONE!) type of tomato. Now we’re starting with the hard squashes, green leafy bits and heartier veggies like sweet potatoes.

So what’s in the back log from last week?  All the onions were used to feed my yolky addiction and the grapes made the perfect daytime snack. The tomatillos and tomatoes were used in a dinner I’ll be posting about soon but I’ve still got the eggplant, parlsey, summer squash, Red Kori Squash, cucumbers, one bell pepper and potatoes. Eep. Don’t worry, it shant got to waste!

The good news is that tonight we used another onion, some bell peppers and basil in a recipe rehab gone right. Stay tuned tomorrow for THE GREAT QUINOA CAPER…