Warning: count(): Parameter must be an array or an object that implements Countable in /home/mnha5re7g0ey/domains/thehipsterho.me/html/wp-content/plugins/iwp-client/api.php on line 40
 veggies Archives - The Hipster Home This is the post where I tell you how/why I made chicken pot pies. Prepare to salivate.

I will admit to having not one but TWO cookbooks in my possession recently that prominently feature chicken pot pies. While I never got around to making the recipe found in Cooking for Two: Perfect Meals for Pairs

, I did finally squelch my obsession by making the recipe from New Classic Family Dinners

. Does it seem like a lot of work? Yes. Is it enormously satisfying? Absolutely.

Think about this: how do you really make a pot pie? Blanch some veggies, cook some chicken, make some sauce, top with pre-made puff pastry, bake.  SIMPLE! Now all of that really does add up to a lot of work. But dang it, if I, a food styling dunce, can take some freakin fantastic pictures of the finished product, you too can make a jaw-dropping meal. Impress your lady or man (or lady man?) and GET LAID! This meal will do it. But don’t call it a chicken pot pie. Call it something sexier. How about… the butter-topped chick bake. How’s that?

Let’s get to the real recipe… In a small saucepan, bring the chicken stock to a boil. Add the carrots, reduce the heat and simmer for 4 minutes. Remove the carrots with a straining spoon and transfer to a bowl with the peas and green beans. You won’t need this again until later so set it aside. Take out another saucepan and add salted water. Once boiling, drop the onion bits into it. Allow to cook for 10 minutes or until tender. It’s ok if the segments break apart while cooking. When soft, remove and cool in a bowl of ice water. Add the drained onions to the peas, green beans, and carrots. Dump in the chicken and mix together. Taste and add salt and pepper to taste. Now you’ve got the main filling. Sauce time!

In a medium saucepan, melt the butter over low heat and add the flour. This is a roux. Stir with a wooden spoon until the mixture starts to brown. Remove from the heat and whisk in the chicken stock. Put the pot back on the heat and simmer, whisking constantly. Lower the heat and simmer for 15 minutes, taking care to mix so that the sauce doesn’t char on the bottom. Add salt and pepper to taste and add the sage. Allow the mixture to cool for 5 minutes, then whisk in the creme fraiche. Pour the sauce over the meat and veggies, mixing well. Presto, saucetastical filling.

Butter 4 ramekins. Distribute the filling between the ramekins and prepare the puff pastry by cutting it into 4 pieces that will amply cover the top of the ramekins. (An aside: at this point in the unadulterated recipe, Mark Peel recommends refrigerating the filling and then popping the pot pies in the freezer for 20 minutes. I didn’t do that. He doesn’t say why he does it and my pot pies came out fine without the extra waiting time.) Whisk together the egg and water to use for puff pastry sealant. Brush it over the edges of the ramekins then place the puff pastry pieces over the top. Press, seal and crimp the puff pastry around the edge of the ramekin. Pierce the pot pies in the top to allow steam to escape. Brush the top with the egg mixture and place on a cookie tray. Bake until a lovely shade of golden brown, around 20 minutes. Eat. Enjoy! YUM. DANG IT. Now all I want to eat right  now is some buttery crust dipped in pot pie sauce with a nice piece of chicken in the bite. Oh man, ecstasy. 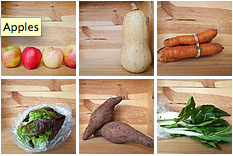 We’ve got a box of fruit and vegetables ready for consumption here at The Hipster Home but after this, there won’t be anything to share until January 14th. Ho’boy, that’s a long time.  I originally planned to share a recipe for chicken pot pie or baked eggs with this post today but I just realized that neither one of those feature an ingredient from this box. You, fine readers, get an IOU for one recipe.

How did this box fare the weekend?  For starts, the Mr. included some of the watermelon daikon radishes in a curry he whipped up last night. Surprise! They were REALLY GOOD. They were soft without being overly starchy like their brethren, the potato. Besides that, we consumed half the mandarins (an incredible and easy snack) and the lettuce was prep washed and ready to go.

Where do we go from here? First up is the a Eatwell recipe I cannot wait to try: Sweet Potato- Leek soup with Spicy Sausage. And then I’m going to make my first batch of stock. (Hm, or maybe I should reverse that so I can use my stock IN the soup?) With the carrots, celery, (radishes?) and cooked chicken parts I have saved in the freezer, it’s time to double, double, toil and trouble; fire burn, and cauldron bubble. Have you ever made stock before? Any suggestions?

Undoubtedly, one of the greatest discoveries since living in San Francisco is the idea of community supported agriculture. By joining a CSA, local farms hook you up with incredibly fresh produce and the warm fuzzy of knowing that your food purchases are making a considerable impact.

I can’t remember how I first heard about my CSA, Eatwell Farm, but it’s a pretty incredible deal. Although slightly more expensive than grocery store produce, there is something to be said about the quantity and assortment I find in my box every week. Not to mention the enjoyable task of eating all your veggies and finding new ways to prepare items for each meal. It’s also been a great lesson for this thing called ‘the seasons’ where geographically, some fruits and veggies have a limited growing time in northern California. Tomatoes mean OH MAN it’s summer while squash means winter! And soup.

Check out this week’s box:

Thus far, I’m planning on sharing my weekly box with you all. And by all means PLEASE lemme know if you’ve got a killer recipe or prep idea featuring any of these ingredients! This week, I’m really excited about the tomatillos so if you know of something delicious I can make with them, let me know in the comments or drop me a line.

Other CSAs recommended to me in San Francisco include:

Do you have other questions about CSAs I didn’t answer here? Leave em in the comments!

EDIT: I’ll be updating with links from the veggies used in other recipes that are posted on here. First up, the onions were used in the Sesame- Ginger Soba Noodles recipe!