Warning: count(): Parameter must be an array or an object that implements Countable in /home/mnha5re7g0ey/domains/thehipsterho.me/html/wp-content/plugins/iwp-client/api.php on line 40
 Personal Essay Archives - Page 2 of 4 - The Hipster Home Time for a third practice board check-in!

My practice board is where I track my skill progress. One half-hour of practice gets me one tally so if I watercolor for an hour, I get two tallies. Once I reach 40 tallies (aka 20 hours), I give myself something off my curated prize list. Then I make a dot above the skill title, wipe that section clean and begin again.

Any idea how many hours I’ve accumulated since starting? Give you a second to guess…

I’ve practiced a total of 98.5 hours since the start. HOO-RAY.

That’s 53.5 additional hours since last month for an average of 1.4 hours a day. Not too shabby, but I’d still love to see more more more.

The 98.5 HOURS worth of practice includes acrylic painting, watercolor, calligraphy, illustration, writing, and play. Writing wins, which is ironic since I share that with you all the least. I write every morning, steady like clockwork.

Turns out that the non-practice side of things is not only tedious, but it’s also not practice. If I had a business hat tally of hours, well that might be alarmingly high. But hey, as we know from the past two What I Read This Weeks, at least I’m not spending my time staring at the computer and reading other people’s words.

One other new thing—I tried using the practice board to motivate on a short term goal. I wanted to get a dozen donuts ready to go into my Etsy shop. It worked, sorta. There’s too much back work behind each donut for me to have felt like it was moving steadily. Womp. Lesson learned.

The practice board is still a good, useful, motivating tool for me. It works. When it came time to wipe clean two areas post-reward (camo pants and kickass red lipstick for watercolor and writing) I worried that it’d be demoralizing to see such big blanks. But the other skill progress compensated while these two areas grow back. This really highlight how this works for me, the swing of things. It’s an ebb and flow, not unlike a tide. Maybe it’s the pull of my creative moon, and the gravity of planets, stars, and the universe on where I settle my attention and focus. 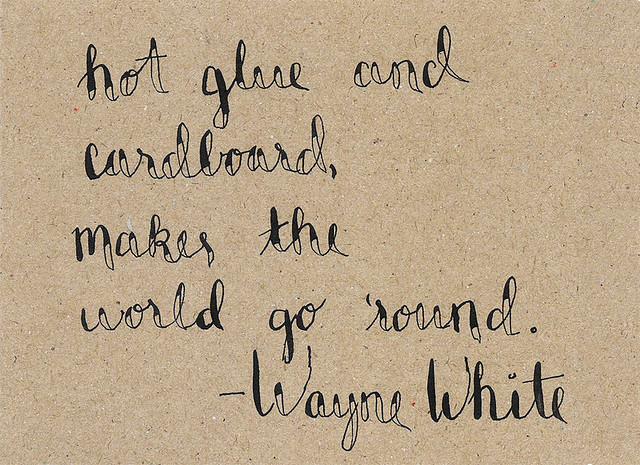 I watched the Wayne White documentary, Beauty Is Embarrassing, this weekend. Although he’s not on my original inspiration wall, Wayne White now up there next to the best of ’em.

For those of you not familiar with the name, you know his work. He created puppets, was several voices, and helped build the weird-o world of Pee-Wee’s Playhouse. After quitting Hollywood, he started painted and is now best-known for phrases painted into thrift store canvases—like Sexy Paintings By Sexy Painters For Sexy People.

Reinvention, humor, notgivingafuck, curiosity, resourcefulness, quick creativity, constantly making things — it’s all there. He uttered the above statement, “hot glue and cardboard, makes the world go ’round.” I scribbled this down as something to bring into my little studio world because yes, I absolutely agree.

If you haven’t seen Beauty Is Embarrassing, I recommend watching it. And a fun fact: did you know Mark Mothersbaugh did music for Pee-Wee’s Playhouse?!

P.S. You totally need some Pee-Wee’s Playhouse in your life today. Here, have this bowl of Ice Cream Soup. Every couple days I count the number of tally marks and hours since starting my practice board. Today? 45 hours of practice! I am encouraged, hopeful, and feeling very happy with myself (but also a little embarrassed, more on that later). But how long did it take me to get here?

Turns out it took one month. I posted about Making Up the Right Schedule and My Practice Hack on June 5th. That’s an average around one+ hours a day. Which is convenient because…

I recently decided that I like the sound of at least an hour a day. Even on the weekend. And holidays. So now that I’m getting at least that much done, how much practice can I log in the next month?

Related: I’m closer to getting the first item on my DID IT! wish list. Since I love round numbers and multiples of four, I will consider a column complete when it reaches 40 tally marks. Or 20 hours total. Mama needs a new pair of shoes*!

As for the embarrassing part—you guys, I am doing this for my WHOLE LIFE right now. And I only managed to get in 45 hours?!?! Should it be triple, QUADRUPLE? Blogging doesn’t necessarily count, and I spend a lot of time doing things that support of the practice but SHEESH. I would love to see 60+ hours in the next month. 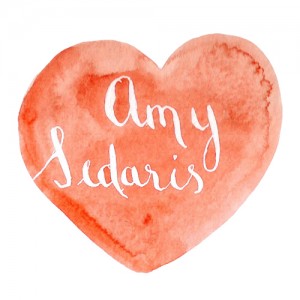 Visit my home studio, and you’ll have ten (or so) sets of eyes tracking you. You might know a few of the faces but most will be unfamiliar. Guests, meet my Hall of Inspiration. The people on that wall all create something that makes me want to tear my clothes off, run down the street, scream and wave my hands. Unnecessary aside: This is a compliment. When I feel this way, I am deeply moved. This reaction differs from when I encounter truth—then I uglyface cry.

As Austin Kleon (author of Steal Like An Artist) calls it, these people comprise My Artistic Family Tree. Which is why this essay exists—I’m methodically digging into the roots. After all, my inspiration’s inspiration is my inspiration.

I’m not self-aware enough to know why I picked this first person as entry #1. Maybe I thought she’d be straightforward (HA!)? After too much reading and watching, it’s impossible to define what makes her tic^. But she’s moved by certain set of stuff, like improvisation, collaboration, and a magnetic connection to the unconventional. She is a minx of disguise and playacting, an author, a demented housewife to one pet bunny, a member of the Talent Family, and a lovable looney and ham. It’s Amy Sedaris.

Is childhood important? It sounds like her’s was rather normal with a dash of that oddball personality. Her family encouraged her, especially her brother, memoirist David Sedaris. The other important cultural stuff included an affinity for unintentionally tragic television (At Home with Peggy Mann), skin conditions and images on the fringe (like Diane Arbus’ freaky collection of photography) and skit-based TV, like Laugh-In and SCTV.

Disinterested in college, Amy Sedaris packed her bags and moved to Chicago. She joined The Second City and that was her bachelor’s degree—a school of improv, sketch comedy, humor, and quick-thinking. It’s not surprising that an institution that describes itself as unconventional would launch her meandering, harlequin career (television, movies, a food book, a craft book, a fabric line, and an amazing talk show guest, funny lady, and on!). I suspect Amy Sedaris learned improvisation on-stage and off and honed her collaborative spirit. She also learned how to make herself the butt of the joke using upbeat, twisted quips while deftly handle sensitive subjects (eating disorders! drugs! sexy sex! race!).

A lot of times girls think they’re funny, but they want to pretty at the same time, and if you want to be funny, you have to be willing to get ugly. – Amy Sedaris in a Washington Post interview

Huff Po: So you don’t gravitate toward things that are labeled “funny” right off the bat? Amy Sedaris: No, that’s a big turn off for me. Like if on the backside of a book it says, “This is hilarious!” I’m like, ugh. But if it has the word, “psychiatric,” I’ll buy it. – From an interview on The Huffington Post

Last thing about Amy Sedaris—she readily admits she’s not a one-woman show. Her crew ranges from her brother, BFF Paul Dinello, the team of illustrators and photographers that helped her create her books, her costumer-friend Adam Selman, and her make-stuff group, the Crafty Beavers. Especially impressive is that she can communicate her often-weird vision so clearly that another person can capture that unglued sense of whimsy. AND: She doesn’t internet. As a technical lone-ranger, she doesn’t use Twitter, Facebook, or a cell phone. Her website is very occasionally updated. Her sole line of communication is the telephone. In her house. Given how prolific and wide-randing her projects, that is impressive.

There are so many things I love about Amy Sedaris, including the fact that she is always entertaining. I liked her in a general sense before, but now I appreciate (just a little) how she sees the world. The years of improvisation, reinvention, collaboration, and nurturing an unvconventional world-view makes her an inimitable and unique entertainer. She is someone I look to her for hilarious, unsettling, and fantastically demented persona.

Hooray you, Amy Sedaris! I am so glad you do you.

Down the Rabbit Hole

^ Yes, this is a pun. One that I feel she might appreciate.

Quite a bit happens in this ole brain of mine. Thoughts swirl and whiz by, tens a moment. It is my job to try and capture some of those ideas, pick the best, and then see them to fruition. I log almost all my ideas, but I’ll only focus on a few. One thing ensures that an idea will get extra attention and it’s actually the number two. Two mentions.

Let’s say I have an idea. I believe this idea to be incredible, life-changing, and completely original (ha!). But I don’t quite get around to it. The minute it appears a second time—I read about this very same idea or impulse somewhere else, DING! We have a very big winner. It goes from being a nice idea to being a necessary one.

Here’s an example: making a creative ritual for myself. It popped up while reading I Just Like to Make Things by Lilla Rogers. She suggested it was part of the day where you can kick your brain into the Work and Create mode. I like that! But I didn’t quite have the clarity on when/why/how and pushed it away until it was more developed. And then this week Manage Your Day-to-Day mentioned the same exact thing. Take note, brain. You gotta get this done!

So I did. A first draft Creative Ritual. 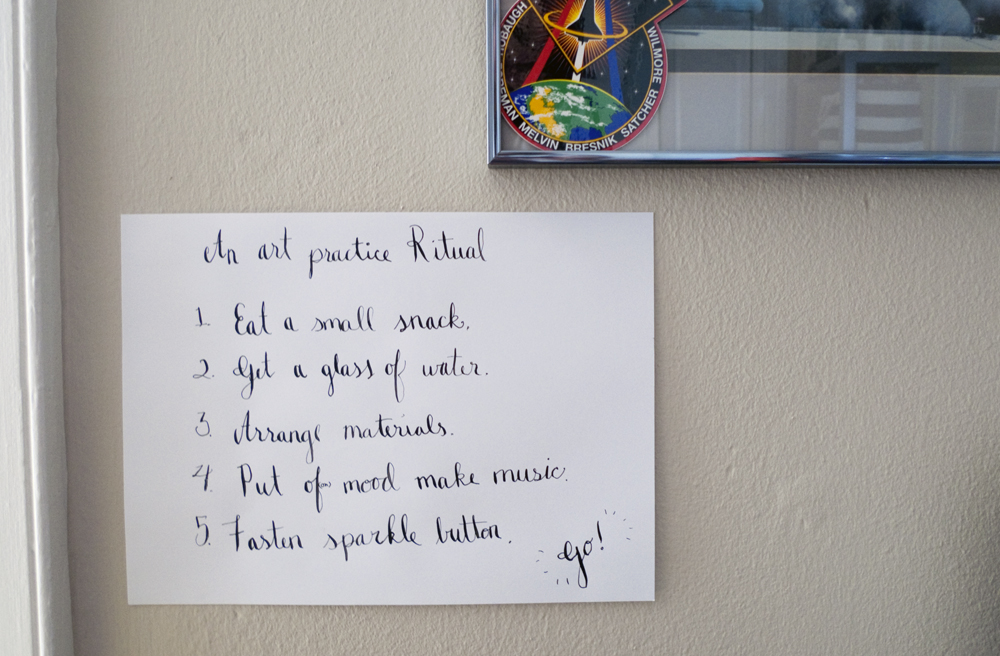 I selected a mix of practical, special, and helpful, even turning one of my distractors into something that would set the stage. Presto change-o, a ritual.

I like this checklist thing. So far, it feels good. And when I had a bit of lizard-brain thrash earlier, I managed to start. (I wanted to avoid painting some frosted donuts. They had white icing, you guys. That is hard. Do you know what color you paint white with watercolor? YOU DON’T.)

How many times does it take for something to appear in front of you before you pay attention? For me, it’s the Power of Two.